UPDATE: In a statement released to the media, the Montgomery County Sheriff's Office stated that the suspect wanted for shooting a gun inside the store was attempting to rob the store. 'On October 16, 2019, at about 2:41 AM, Deputies with the Montgomery County Sheriff's Office responded to the Wal-Mart Supercenter located at 3040 College Park Dr., The Woodlands, Texas in reference to an aggravated robbery. Once on location, Deputies learned that a white male suspect entered the business wearing a dark-colored hoodie, green shorts, black & white tennis shoes with black socks. He was described as being between 5'7'' - 5'11'' tall. The suspect approached a female employee, pointed a handgun at her and forced her into an area of the store containing a safe. The suspect demanded the employee open the safe and provide him with money. While doing so, the employee activated her two-way radio alerting other employees who heard the commotion. The victim's co-workers approached the room to check the victim's welfare, at which time the suspect then ran away. While the suspect was departing from the store, he fired a single shot into the ceiling before fleeing on foot. No money was obtained by the suspect. Responding officers with the Montgomery County Sheriff's Office, Conroe Police Department, Montgomery County Precinct 3 Constable's Office, Shenandoah Police Department canvassed the area for the suspect and a canine was deployed as well. A thorough search of the area was conducted and the suspect was not located. Photos of the suspect are attached, and the Sheriff's Office is requesting the public's assistance with identifying the suspect. If you have any information please contact the Montgomery County Sheriff's Office at 936-760-5800 or Crime Stoppers at 1-800-392-STOP (7867) and refer to Case #19A335178.'ORIGINAL STORY: THE WOODLANDS, TX - Early this morning, 911 received multiple calls about shots fired inside the College Park Walmart, located at 3040 College Park Drive in The Woodlands. Multiple law enforcement agencies responded, as frightened employees and customers evacuated the store. People inside the building stated that they saw a man wearing a mask enter the building, fired a shot in the air, then fled the scene. A search of the area is still ongoing and no arrests have been made. Thankfully, no injuries were reported. Authorities are looking into reports that the suspect fled into the woods behind the store. The suspect may have dropped his backpack outside, which deputies are going through. They are also looking at security camera footage in hopes that it may lead to an arrest. If you have any information regarding this case, please contact Montgomery County Crime Stoppers at 1-800-392-7867. 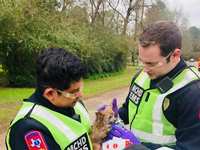 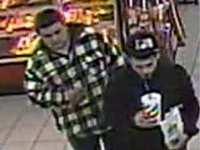 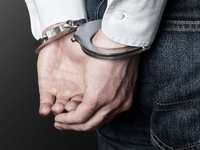 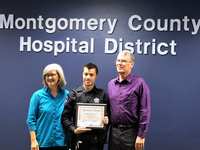