The Woodlands defeats No. 6 Pflugerville

The Woodlands High School boysâ basketball team is going to the Region II-5A Tournament in Waco. Those are words that sound sweat to the ears of Highlanders coach Dale Reed and the 2010-11 team.Itâll be the first region tournament appearance for the Highlanders since 2001-02 and third in the programâs history. The Highlanders lost in this round last season.But that was last season.The Woodlands ran past No. 6 state-ranked and No. 14 nationally-ranked Pflugerville 68-59 Wednesday in a Region II-5A quarterfinals playoff game at Hearne High School. The No. 20 state-ranked Highlanders extended their winning streak to 24 games and added to the school record for wins in a season. The Woodlands enters the region tournament with a 32-3 record.The bar continues to be raised, however. The Highlanders will meet No. 1 state-ranked and No. 8 nationally-ranked Garland Lakeview Centennial (34-1) at 6 p.m. Friday in the Region II-5A semifinals at Waco Midway.The Region II-5A championship game is set for 4 p.m. Saturday at the same site.The Highlanders got there on the strength of 17-point performances from both Nolan Cass and Wes Cole. Cass drilled five 3-pointers as The Woodlands closed the first quarter with a 7-0 run and never looked back, ending the Panthersâ (29-5) season.Brandon Caporale and Garrett Colonna contributed 11 and 10 points respectively while Brian Nordstrom finished with six points. Joey Trinkle added three points and both Hayden Galatas and Jayme Taylor scored two points.The Highlanders led by 14 with 3:15 to play, their biggest margin of the game at 59-45, after back-to-back 3-pointers from Cass. But the Panthers quickly cut the lead to 60-54 with 2:15 remaining.Keeping their composure down the stretch, however, the Highlanders were able to put the game in the âwinâ column. Cole and Colonna each hit three free throws in the final 1:37 to keep the Panthers at armâs length.The Panthers led 3-0 and 13-12 before The Woodlands made its run late in the opening period to take a 19-13 lead. Taylor made it a 9-0 run with a follow-up to start the second quarter and a Trinkle free throw gave The Woodlands its first double-digit lead at 25-15.The lead was 36-29 at halftime but quickly reached double digits again in the third quarter. Pflugerville made another run to end the quarter but the Highlanders maintained a comfortable 47-38 lead and spent most of the fourth quarter ahead by 10 points or more. 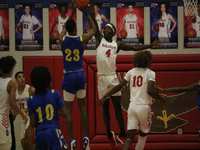