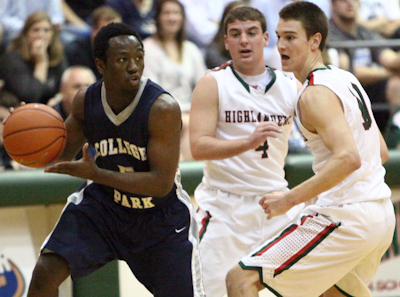 THE WOODLANDS, Texas – The Woodlands High School boys’ basketball team used a balanced attack at home Friday in front of a capacity crowd to hold off the College Park Cavaliers 68-56 and remain unbeaten in District 14-5A play.

It was Senior Night and Hayden Galatas made the most of it, leading a trio of double-figure scorers with 14 points. It was also “Black Out” night with coach Dale Reed donning a black suit and cheerleaders wearing black uniforms as the Highlanders held off a late Cavaliers rally to improve to 27-5 overall and 11-0 in district play.

Senior Garret Colonna and junior Zach Manning finished with 12 and 11 points respectively for the Highlanders, who close the regular season Tuesday at Oak Ridge. The War Eagles (14-12, 5-6) benefitted from The Woodlands’ victory Friday, clinching the district’s fourth and final playoff berth despite being thumped 61-31 at Lufkin.

Desmond Fleming led all scorers with 18 points and helped keep College Park close throughout. The Cavaliers (19-16, 3-8) also got 11 points from Jayden Holden, nine from Keanu Andaya and eight from Karson Baer.

Garrett Burlas started the scoring for The Woodlands with a 3-pointer and his trey in the fourth quarter pushed the lead to 60-50 after Andaya had helped to rally the Cavaliers to within 60-54 midway through the fourth quarter.

College Park led 12-9 early before Manning hit a pair of free throws with two minutes left in the first quarter giving the Highlanders a 14-12 lead they wouldn’t relinquish. Manning drilled a 3-pointer before the end of the quarter as The Highlanders’ lead grew to 21-16 after the first eight minutes.

Galatas connected on a couple of 3-pointers in the second quarter as the Highlanders extended the lead to 37-25 at halftime before College Park used a 17-12 advantage in the third quarter to make a game of it. Timi Adeleye hit a 3-pointer just before the end of the period to keep The Woodlands in front 49-42 entering the fourth quarter.

Joe Primavera and Brian Baehl scored early fourth-quarter buckets to make sure the Cavaliers drew no closer than 55-50. Garrett Smith scored to start a 5-0 run and a 60-50 Highlanders lead.

But College Park answered with four points of its own and with 1:21 remaining in the game it was 60-54, forcing Galatas and Manning to hit clutch free throws down the stretch to secure the lead. 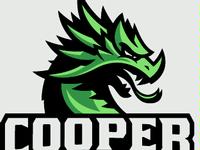