THE WOODLANDS, Texas – They started out a little slow in the District 14-5A opener at home Tuesday but by halftime The Woodlands High School boys’ basketball team had solved Conroe’s zone defense and the Highlanders rolled on to a 56-29 victory.“They were patient,” The Woodlands head boys’ basketball coach Dale Reed said. “Whenever you’re going against a zone, it’s hard to get the looks you want. So our guys did a great job to keep probing it and keep seeing what would work. And then we made a couple of outside shots and that got us going.”Cody Mason led the way for The Woodlands (11-5, 1-0). The senior forward scored 19 points, including 12 in the first half. It was a 12-10 game a few minutes into the second quarter before Mason heated up and the Highlanders reeled off a 13-2 run to take a 25-12 lead at halftime.Mason opened the second half with a dunk and the lead ballooned to 35-16 barely two minutes into the third quarter. The Highlanders never looked back, sending the Tigers to their ninth loss against seven wins.“I was real pleased with our guys’ effort,” Reed said. “I thought our guys did a great job of taking advantage of our size and using it against the zone – a lot of high-low type of looks. I just loved our guys’ patience against their zone.“And then our defense was really strong again tonight.”The Highlanders allowed just four points in the first quarter. “It was just a great overall defensive performance,” Reed said.Xavier Valdes used his decided height advantage to score 10 points while Aaron Kovach and Kyle Schnakenburg added eight and seven points respectively.Connor Burkett and Shan Toner each scored four points and Kyle Spears finished with three points. Zach Manning rounded out the scoring with one point. The Woodlands 6-7 sophomore forward Cameron Burkett sat out with an ankle injury.The Highlanders visit A&M Consolidated for a 7 p.m. Friday district showdown. 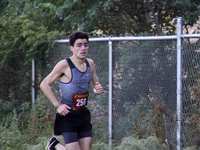